How To Play 12 Bar Blues

The vast majority of contemporary blues music is based on what is termed a 12-bar format.  That is, the main body of a song follows a set pattern of chords over 12 bars of music that is repeated over and over.  Some songs may have several different patterns to give them a bit of variety, but the guts of the song will normally be based on a set chord pattern for every 12 bars of music.  So, if someone says to you, “play a 12-bar”, this is what they are referring to.

Blues is not limited to 12-bar patterns.  There are also songs based on 8-bar, 16-bar and 24-bar patterns.  We’ll stick to the 12-bar forms here because, as I mentioned earlier, these are the ones you will most often hear played by blues musicians.

The chords most commonly played over these 12 bars of music are the first, fourth and fifth chords of the key that the song is written in.  These are usually referred to by Roman numerals as the I, IV and V chords.  If we take the A major scale, you will see below that these chords are A, D and E respectively;

There are dozens of variations to the chord patterns that can be played over the 12 bars and there are also dozens of different chord types that can be used depending on the feel you want to give to the progression.  The most commonly used chords are the dominant 7th and 9th chords for a major progression and the minor equivalents of these for minor progressions.

The most basic rhythm is in 4/4 time which means that there are four quarter notes per bar of music, or put more simply, a count of 1,2,3,4 repeated over and over.  Other rhythms commonly used are in 6/8 and 12/8 time which are based on triplets.

Let’s now start off with a standard 12-bar blues in its simplest form using the I, IV and V chords in the key of A in simple 4/4 time. 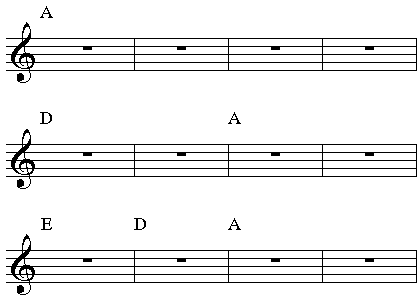 Initially, just play the chords with a downward strum per beat.  The chord names and slashes (called rhythm slashes) represent one beat each which make a total of 4 beats per bar.  Keep playing a chord until you reach a new chord at the start of a bar and so forth.  When you reach the end of bar 12, keep going by repeating the pattern from bar 1.

The idea here is to learn the chord sequence and begin to feel/hear when the chords should change.  After a while, you should be able to hear the musical tension build up and release with each chord change.  You will need to have this feeling for the chord changes firmly entrenched in your brain before getting into the more complicated 12-bar patterns and rhythms.

Get used to playing the A chord using a partial bar with your index finger.  Make sure the high ‘e’ string is deadened by the index finger and doesn’t play a F# when you strum.  This technique will be important later on when we start to play some of the more complicated shuffle rhythms.

Additional Images From The Video

This image demonstrates how you would find the I, IV, and V chords in the key of A using the A major scale: 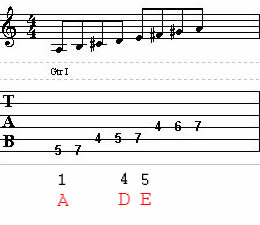 Here’s a variation of the standard 12 bar blues. It uses the “quick change” variant:

Here are the standard 12 bar blues in E: 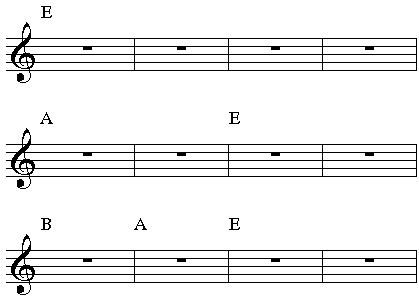